When Things Got Too Weird for Ripley, a poem 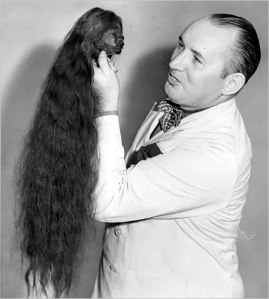 When Things Got Too Weird for Ripley

Notwithstanding the fact that he still received
more letters every year than anyone on earth,
including Santa Claus — Believe It Or Not —
his sinking fits of despair started to occur

with frightening regularity after the war;
on his way to the far East for the first time
since Pearl Harbor Day, he stood on the plucked
turkey-breast hull of a sunken battleship,

the Arizona, looking down at his well-shod feet
as though the rolled steel were transparent,
as if he could see the innocently disarrayed
skeletons of the young men still entombed within —

Believe It Or Not — his full, delicate lips stretched
over his protruding teeth, speechless for
the first time in fifty-odd years. Oddly, he
couldn’t take his mind off the Tibetan skull-bowl

at home, he felt the hinged roof of the bowl
under his cold, stiff fingers, he tasted warm
sacramental blood and wine, mixed in equal parts,
sharp and bitter against the roof of his mouth

like the blade of a rusty iron sword.
For the cameras, he read aloud the notes
he had with him, but his voice wasn’t his anymore,
it was the gentle, quavery voice of an old, old man.

Although he was just fifty-five, he had the manner
and body of someone thirty years older.
Ever since his first success, he had been
a hard-working, hard-playing man, with the immodest

tastes of an oriental emperor; he earned a million
dollars a year, and knew how to spend it —
on better days, he’d have six smart, well-dressed
women under his roof, for energetic conversation,

for private fun and games. Out on his secluded
spit of land in the middle of Oyster Bay,
they’d barbecue whole pigs, split sides of beef,
and the flavor of the smoked flesh he tore into

was marvelous, marvelous. But, later that day,
on the continuing flight from Hawaii to Japan,
he actually lost track of where he was for a few moments,
and through his puffy, heavy lids, the woman bending

over him with the pitcher of pink lemonade looked
exactly like the love of his life, dead ten years
that month of cancer. Dear, sweet, Ola, he almost said,
then caught himself. Though his temples sweated

copiously, he refused to soil his handkerchief,
letting his shirt become wet, stiff with his salt.
He broadcast live the next morning from Hiroshima’s
approximate ground zero, sitting at a rusty card table,

fumbling with watches frozen at the moment of detonation,
staring dreamily at a child’s embroidered silk slipper
retrieved intact from the dunes of sticky ash —
Believe It Or Not — the only artifact to survive

the blast for many thousands of square yards.
He haggled over price and bought it for his
newest museum, opening next month in Las Vegas.
As long as he could remember, he’d been happily

locked in an embrace with the whole odd eclectic world,
savoring each one-of-a-kind moment his physical bulk
passed through, but lately, and especially here,
for the first time that innocent enthusiasm

which had brought him so very far from Riverside,
California seemed to encircle his tired neck
like one of the great unwieldy money-stones
of New Zealand, giving little joy, though if

anyone asked, he’d still say he’d rather die than
leave it at the side of the road. Upon reaching
his final destination, Shanghai, he saw his dearest,
most beloved city in a panic: everyone knew

the Reds were marching down from the hills —
it was only a matter of time before the soul of China
became engorged and insensible with revolution.
Voracious appetite of old quelled, he stuffed down

a few quarts of sticky rice with Seven Delicacies
for show, for form, so as not to upset his agent.
A week later, back in New York, for the second time
he faltered while on the air, then passed out,

slithering to the floor in his fine wool suit
like a large scrubbed potato, hands scrabbling
against the studio floor, grasping the taped cords
underfoot with a stylish syncopated rhythm,

his young female assistant staring into the camera
like a ritual mask, her mouth a lipsticked
slash of fear, babbling nonsense until they thought
to switch to the test pattern: the perils of

live television. That night, Rip called a neighbor
from the hospital; I’m getting out of here
tomorrow morning, he said. I’m taking us
on a long vacation, God knows we all deserve it.

He hung up the black phone and leaned back dead
before his head touched the pillow. Years later,
his dearest friends all said it was a blessing
he didn’t live to see how the world came to make

his column of physical oddities seem by comparison —
Believe It Or Not — warm, safe, what we dream of
when we dream of heaven, not one of us doubting for
a minute anymore that fact is stranger than fiction.

2 responses to “When Things Got Too Weird for Ripley, a poem”