the warm, silken blanket of her skin, might as well be

made of wax. Her hair, its smell of cherry-almond

shampoo, is no more than a flame, consuming tissue

paper. She will be gone before the universe notices her.

mandala, a round picture made from layering different

a yard in diameter, it took three unbroken days to make it.

Tomorrow at 11 a.m. they’re going to sweep it away.

This creation of beauty then its eradication is symbolic.

My tears are irrelevant. My suffering is insignificant.

The monks believe our material existence is transitory,

well-nigh unimportant. They were relatively young

though it was hard to tell because of their shaved heads.

tunics. I walked by them, entering the building, shied

away, tried not to look. But they seemed to radiate

serene alertness, a lack of angst. They didn’t flinch

but gazed at me, through me, beyond me, plainly,

readily. As a little girl, I wanted to be a nun.

Discipline of the flesh is holy. To contradict desire

is sacred. The world is a sickening dream we long

to wake from. I dressed one year as St. Theresa

for Halloween. I was in Catholic school for kindergarten

and first grade, and came home one day to tell my mother

with Jesus. She put me in public school the next day.

She was dismayed. I had seen dead animals

in the kitchen, plenty. One time I saw a chicken

roasting in the oven, asked what it was. “A chicken,”

she said. The earth is not significant. The earth

is an hallucination. I got hysterical, pleading with her

to take it out of the oven. She fibbed, told me

there were two kinds of chickens, one with feathers,

for running around outside, the other for eating.

It relieved my frenzy, then. What about now?

My life is an illusion, my life is empty. I shovel food

into the mouths of other unfulfilled beings. Ceaselessly,

I’m on the horns of a dilemma. Doesn’t every suburban

housewife secretly, in her heart of hearts, want to run off

on spiritual pilgrimage, at least each and every time

the dog vomits on the rug? Yes, I live like a spy.

I feel like an undercover agent most of the time.

I just don’t get the whole show. Something’s not been

explained fully to me. I’m waiting for my operating instructions,

but my contact is nowhere to be found. I don’t know

if I’m religious. I never have the strength to decide

if I believe. From that first plump, naked chicken in the oven

I cried for, at five — chickens have their own heaven,

my mother lied, bright with love — from that first dark

lamentation over the insolence of death I wanted only

to understand the enigma of creation, to fathom the depth

of my intimate source. Fitted out as Saint Theresa

it felt sinful to accept candy, I wanted more than anything

to sanctify those hands moving with meek generosity

toward my outstretched pillowcase. Yes, I saw myself

Or robed in red, a fluffy hat atop my head; a hesitant crown.

I could easily put fragrant powdered saffron in my hair,

eat nothing but fruit picked off the ground, sweep the earth

bare before my steps with a handmade straw broom.

All creeds appeal to me inside the inquisitive casement

of my brain: a fickle twitch of nerves, chemicals, proud

of its weak pulses of electricity. The difficulty dwells

never filling up. Afraid to give over to a thing I can’t control —

or at least charm. I want to dance in green meadows,

wrap ribbons around a pole, follow the golden ring.

I imagine flinging myself into cool grass, crying from joy.

IV. Waiting, But Not Endlessly

Everything will be all right, the melancholy quietness says,

as I lie solid on the ground. I feel resigned to my fate,

steeled to endure the torments ahead — that one last breath,

that one ultimate moment of longing. Have I received

the divine gift of faith? I still sit for hours, eyes closed,

waiting for that voice, those words, to lift the roof

of my skull and cleanse my fears away like silvery water.

I will, after all, be gone before the universe notices me.

Luckily enough, all of my relationships have failed so quickly they’ve never come to divorce. So I really don’t know anything about it. But honestly, this seems pretty whack.

The “good” news? He’s on his second lawyer now. And somewhere in between all the property, claims, and collateral damage are two broken hearts.

Got a stupid ex? Want to see his or her quote up here in anonymous infamy? Submit your quote to ThingsMyExSaid! 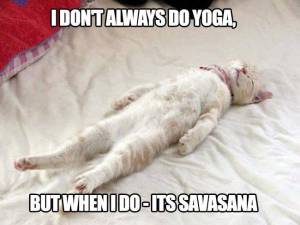 the divided self, a poem

That lonely man and that sad woman

are dead now, but I still can’t

get away from their lawful claims.

They possess my hands, my feet,

my face. I have only been loaned

for me out of unseen molecules

I believe in by faith, with thanksgiving.

Blind, jerking passion such as this

nurtures the kind of organized madness

I learned to live with a long time ago.

Short and sweet, to the point:

I hate them bringing me into the world!

What on earth were they thinking,

of a postwar kitchen table?

Or did they simply writhe on the linoleum?

I never approved the intrusion of his

As for Mother, she arched dizzily beneath him

and though she opened her flesh,

how she longed to kill him with her shoe.

Such war made me. Secret wishes

do a body in. I am that frail universe

“We also often add to our pain and suffering by being overly sensitive, over‑reacting to minor things, and sometimes taking things too personally.”

His Holiness the Dalai Lama

Boy, is that what I do. I am overly sensitive, I overreact to minor things, and I almost always take things too personally.

“If we both still believed in marriage as an institution, would you marry me?” Ella asked.

“Not right now. You’ve been dating another guy for six months. But maybe later,” Ratboy said. His plan was working!

“Fair enough,” she said. Right then, she should have RUN.

I name them here

love has seven names
do you know what they are?
brightness, flame, melting

transformation, sunshine, shine
Light, that final healing
that is the end and is the beginning
these are the warmth of heart-strings

where the soul may rest in
clearest water, purity of unity
truth that is not true or false

love is wise enough in nature
to survive indefinitely, with or without you
her signs fall down from the fusion

Mirror, Mirror On The Wall, Who Is The Fairest Of Us All?

Much has been said about the subcontinent’s archaic obsession with the “goray gaal” (fair skin). And while many amongst us will opine our disapprobation, there will be quite a few of the same lot who will flock to the air-conditioned stores (or non air-conditioned ) to try out another latest addition to the numerous miracle creams that are the self-acclaimed magic ticket to getting the Prince Charming who drives a Mercedes.

In this day and age, it is a highly Quixotic notion to “ooh and aah” over white skin and frown with distaste at a brown or even slightly wheatish complexion. In fact, it has always been a Quixotic notion. After all, how can the colour of a person’s skin define their roles as prospective husbands and wives and daughters-in-law and sons-in-law? Compatibility, personality and character, have been told to go play hide-and-seek. D’ Accord?

“The Dynasty Trust is an excellent tax planning vehicle as it permanently removes significant assets and the future appreciation on those assets from the transfer tax system. If no one “owns” these assets in the future, they will not be part of anyone’s taxable estate. In addition, the Dynasty Trust is an excellent asset protection vehicle. With no owner’s of the assets, creditors cannot make successful claims against the assets in these trusts, allowing them to be preserved, even against liability claims against the trust’s beneficiaries.

The trust is initially created for “primary beneficiaries” who are the Grantor’s children. They are given a limited power of appointment over the trust property in favor of their descendants. If this power is not exercised, the trust property passes to the descendants of the Grantor’s children, and so on. The trustee has discretion to pay a beneficiary income and principal from the trust, but is under no obligation to distribute any property at any time.

The trust is sensitive to the possible generation-skipping tax issues that can arise in this type of trust. (Section 3.1B). The trustee is given broad investment discretion. (Sections 3.1A and 3.3)

Since the trust is intended to last a very long time, the initial trustee is not likely to outlive the trust. Circumstances unforeseen at the inception of the trust may very well occur. For these reasons, the trust (section 4.5) appoints a “trust protector” – a person or institution to serve as the trust’s “watchdog” over what may need to be changed, amended, removed, etc. as time goes on.

Article 10 is also worth noting. The Grantor should consider how he/she may want to define such basic terms as “spouse” and “child”, given the potential long-term of the trust and evolving issues of social change, genetic engineering, etc. One can consider a “traditional” definition here, or allowance of either present or possible future definitions to be included in the trust.

It is not a question of a Syrian, or Palestinian, Israeli, or the Child of ANY particular country. Children, Women, Innocents, People Entirely Unconnected with whatever grievance might have happened, are Dying, Thus Cruelly, All over the World.

The Israelites had been settled on the Banks of the rivers of Babylon. Their Land had been devastated, their fields had been plundered long ago, and even their Single Temple had been Destroyed. Israel is one of the Very Small Nations, and one of the Much Persecuted ones. Its people are a very Homogenous group. Thus, when they had been told by their captors to sing one their songs, they had said: “Just How can We sing when our Land is in Ruins, and our People are living as Slaves?” That is the sense of Psalm 137:4. And the famous song, ‘By the Rivers of Babylon,’ is based on this.