The Elephant In The Room, an essay 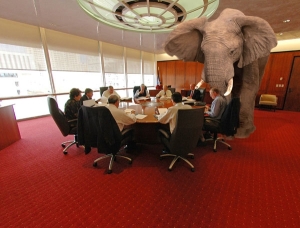 The Elephant In The Room, an essay

The American “Tea Party” is a radical, far-right organization which stands for nothing less than  rolling the evolution of contemporary civilization back by one, or two, or even three or four hundred years – back to a time when only rich, white, men governed society, and, preferably, rich, white, men governing that society in as “selective” a group as possible.  Monarchy – in extreme cases, even Feudalism — is, to Tea Partiers, the “good old days,” which they would like to see “restored.”  A potent ingredient to the Tea Party hallucination is “private enterprise,” a Holy Grail represented by entities like General Electric.  The United States of America is home to 13 of the 20 largest “transnational” corporations on the globe.  Multinational corporations are far more powerful than any prior tyrannical force in history.

Thus, the Tea Party explains, poor people are poor because they are stupid and/or lazy, and therefore “deserve” to be poor.  Rich people are rich because they are smart and/or hardworking, and therefore “deserve” to be rich.  The passage of inherited wealth from the elite class to its offspring must be protected because it is “deserved” by the offspring of such smart and/or hardworking people.  There is, of course, the mythology that every so often, one of the poor will find their way into the ranks of the rich, and one of the rich will find themselves thrown down into the ranks of the poor.

The history of the present multinational corporation is — much like the history of King George III of Great Britain (as observed by Thomas Jefferson) — “a history of repeated injuries and usurpations, all having, in direct object, the establishment of an absolute tyranny[.]”  This is precisely the moment the United States of America has reached; will we, as a people, do the work of rebuilding our troubled, restless, suffering nation?  Will we stop our own decades-long moral, structural, and economic demolition at the hands of a regressive, elitist, antidemocratic, power elite?   Will we abdicate our own social responsibility and continue to allow “too big to fail” multinational corporations to do irrevocable harm to us and the rest of the human beings on this planet?  Will we become, in reality, merely the Corporate States of Amerka?

Mass cultural hypnosis and mass public disinformation is essential to root out the harmful weeds of “equality,” “democracy,” “fairness,” and “justice.”  Dumbing down the population by a few decades of underfunding public schools is a prerequisite to the suitability of hypnosis and disinformation; as is a very carefully planned, gradual, economic destruction of the unpredictable, possibly dangerous, middle classes (who often demand treatment inconvenient to the ruling elite, and unlike the lower “wage slave” classes, actually have some power with which to back up their demands).  It is important to deprive the middle classes of adequate education and economic security with such a gradual, gentle, patient hand that the tightening of that “hangman’s noose” goes unnoticed until it is secure and inescapable.

Most important, however, is the control of the one branch of American government which is practically impervious to democratic principles or controls:  the federal judiciary.  Since federal jurists are appointed for life, popular opinion and social movements have little to no effect on the judicial branch, unlike the executive and legislative branches, where at least the fiction of “responsibility to the electorate” must be maintained in order to perpetuate the critically important elements of mass cultural hypnosis and disinformation.

“The Dynasty Trust is an excellent tax planning vehicle as it permanently removes significant assets and the future appreciation on those assets from the transfer tax system. If no one “owns” these assets in the future, they will not be part of anyone’s taxable estate. In addition, the Dynasty Trust is an excellent asset protection vehicle. With no owner’s of the assets, creditors cannot make successful claims against the assets in these trusts, allowing them to be preserved, even against liability claims against the trust’s beneficiaries.

The trust is initially created for “primary beneficiaries” who are the Grantor’s children. They are given a limited power of appointment over the trust property in favor of their descendants. If this power is not exercised, the trust property passes to the descendants of the Grantor’s children, and so on. The trustee has discretion to pay a beneficiary income and principal from the trust, but is under no obligation to distribute any property at any time.

The trust is sensitive to the possible generation-skipping tax issues that can arise in this type of trust. (Section 3.1B). The trustee is given broad investment discretion. (Sections 3.1A and 3.3)

Since the trust is intended to last a very long time, the initial trustee is not likely to outlive the trust. Circumstances unforeseen at the inception of the trust may very well occur. For these reasons, the trust (section 4.5) appoints a “trust protector” – a person or institution to serve as the trust’s “watchdog” over what may need to be changed, amended, removed, etc. as time goes on.

Article 10 is also worth noting. The Grantor should consider how he/she may want to define such basic terms as “spouse” and “child”, given the potential long-term of the trust and evolving issues of social change, genetic engineering, etc. One can consider a “traditional” definition here, or allowance of either present or possible future definitions to be included in the trust.