Evolve Or Die, an opening manifesto… 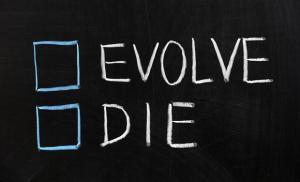 Evolve Or Die, an opening manifesto…

I was thinking about stuff, in my weird way, which I often do, because I’m basically weird, stuff like religion and politics and war and peace and men and women and money and love and power and all that kind of stuff, the giant, sometimes-incomprehensible stuff that most people don’t appear to think about all that much, except in a purely academic way, and only if they can get some money or some fame or some power out of it.  So why aren’t we all thinking about things which, logically, are very, very important and create so much human suffering, much of it perfectly avoidable with reasonable effort?

The whole situation we find ourselves in right now really bothers me because, if the average human is THINKING about these problems, problems which appear to have been with us for the entire course of human history, problems which seem as though they are perfectly amenable to being SOLVED, then those average humans should be TALKING about them a lot more, and trying to be part of the solution! Because people are really stupid to be fighting all these goddamned, fucking, idiotic wars, wars that kill people and destroy stuff and hurt children and scar children and make sure children grow up to pass that war meme, that war memory, that war “tradition” along to the next generation, and so on and so on ad infinitum, ad nauseam.

Which makes my stomach hurt, sometimes BADLY.  And then I remember how people in the United States of America seem to have given up voting!  Talk about my stomach hurting!

And, all of my weird thinking seemed rather quietly and suddenly to coalesce, to interweave, to assemble itself into an idea bigger than me.  An inspired idea. An idea from the Muse; from the Universe; from God; from Spirit.  You know, that watcher, or presence, or soul, or place within yourself which is all-at-once creative… imaginative… passionate… compassionate… serene… silly… serious… sad… sublime… that place?  If you don’t know that place, at all, then I feel sad for you.  Not “sorry” for you – that word seems to me that it implies judgment and a consequent feeling of superiority or power which is unhealthy – but sad for you.  The simple sadness a two year old feels when seeing another two year old fall down, scrape a knee, and burst into tears.  That feeling.  Do you remember it?  If you cannot remember it, I feel sad for you again.  It is a feeling we should all remember.  It is the sadness you feel when your mother is ill; the sadness you feel when your dear pet is ill; when your child is ill; when you are ill; when the world is ill.

You know, history is important.  So is IMAGINATION.  Liberal/Conservative, Democrat/Republican, Progressive/Reactionary, Labor/Capital, Open-minded/Dogmatic… call the differences in human outlook whatever you like!  One side fears, or dislikes, or opposes change; the other side accepts, or likes, or promotes change.  That is the essence, the nut, the essential oil, which creates the varietal, sometimes minor, sometimes dangerous differences in our human culture/temperament/society/milieu.  We must start thinking as one planet, one species: not separated by physical characteristics… or wealth… or religion… or language… or country… or region… or clan… or tribe… or any of the myriad ways groups of human beings have managed to “quarantine” themselves from “infection” by other groups! We are not microbes!  We are not supposed to attack each other without mercy.  Survival of the fittest does not mean the survivors survive because they kill everything else; it means evolve, or die.

Human beings are on the doorstep of radical change.  No shit!  Look at our history: though an individual lifetime may, or may not, feel to that specific individual as being lived on the doorstep of radical change, remember, as a species, we have OFTEN been on the doorstep of radical change.  We are always living within – not at the end of – human history.  Which is why respecting the lessons of our past must ALWAYS go hand-in-hand with a thoughtful and imaginative look ahead, to our future!  We are in the process of evolving into another human species.  Don’t forget that!  We are on the continuous “ride” of evolution, of change, of metamorphosis into another species of “human being” – hopefully, this time, a more “humane” human being who is truly wiser than we are, who stops jeopardizing human survival by an unthinking disregard for physical, social, and cultural environments yet who remains flexible enough to survive the inexorable process of change in those environments!

How to evolve?  I’m not sure.  I can rattle off the first things I think of.  Read books.  A lot of them.  Spend some time outside, the more the better.  Spend some time thinking seriously about your life, and the life of every other human being.  Don’t hoard planetary resources which, by simple birthright, also belong to billions of other humans, your (admittedly distant, yet undeniably related) COUSINS through our common ancestors.  Relax, nobody’s asking you to give up the internet.  Simply treat others the way you would like to be treated.  Speak some encouraging words to those who need them.  Help some people in need.  Protect children from harm.  What do you think?  Feel free to edit the list!  We’re all in this TOGETHER.  But, for mercy’s sake… MAKE YOURSELF A LIST.

“I am Protennoia, the Thought that dwells in the Light. I am the movement that dwells in the All, she in whom the All takes its stand, the first-born among those who came to be, she who exists before the All. She (Protennoia) is called by three names, although she dwells alone, since she is perfect. I am invisible within the Thought of the Invisible One. I am revealed in the immeasurable, ineffable (things). I am incomprehensible, dwelling in the incomprehensible. I move in every creature.”

Tagged as Dwell, female, gnostic, god, light, mysticism, nag hammadi, Protennoia, religion, she in whom the all takes its stand, spirit, thought