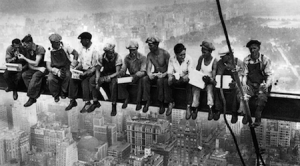 I was going through a lot of men that year.  All men seemed like works of art to me, like sculpture.  With body hair, without ‑‑ the buttocks, the thighs, the chests.  They were all quite lovely to look at.  Their emotional content was something else completely.  They seemed cruel, without love ‑‑ not that it mattered that much to me; I kept myself armored against hurt pretty well.  It was all casual dalliance, a form of gymnastic exercise, no permanence intended.  That was how I was protected.

Francisco was the handsomest man I’d ever dared let myself be attracted to.  We were cast in the same play, that’s how it started.  His friend, Vincent, was also quite handsome, though not my type ‑‑ blonde, blue‑eyed.

During this same time, my father and I were trying to get to know each other, 20 years too late.  He wanted instant fatherhood:  I was just confused by it all.

His VW van ‑‑ his hippie ways.  He thought I was so conservative.  When he told me he was attracted to me physically, sexually, I was only half‑shocked, because I suppose I had felt it too.  I almost wished he would act on it, just to see what it felt like.  It wasn’t like I really saw him as a father figure.

Meanwhile, I slept with every guy who interested me, except the ones who had love in their eyes.  Lust, intellectual curiosity, and admiration for my body ‑‑ these were all OK.  But love?  It gave me the willies.  Long‑term commitments were the last thing on my mind.

My father was living in his van ‑‑ I didn’t want to see him all that much, and that hurt his feelings.  I don’t know what, exactly, was going through my mind.  Attraction and repulsion, like magnetic phenomena.

Then there was the boy who punched the wall and broke his hand.  The short boy, musclebound.  He had sort of, kind of, almost-but-not-quite fallen in love with me.  He wanted to sleep with me, but I refused him.  He didn’t understand why.  I was sleeping with everybody else.  I sensed that a sleeping relationship with him would get too messy.  He would be jealous, passionate, moody, and neurotic.  I only wanted men who were vaguely indifferent?

I loved my film as literature class teacher from afar.  He was balding, blonde, and wore thick glasses.  I mean Coke-bottle thick.  I wanted everybody to make passes at me.  I was almost offended if they showed no overt interest in taking my clothes off.  My only excuse?  I was nineteen years old.