Rain for Remembrance, a poem 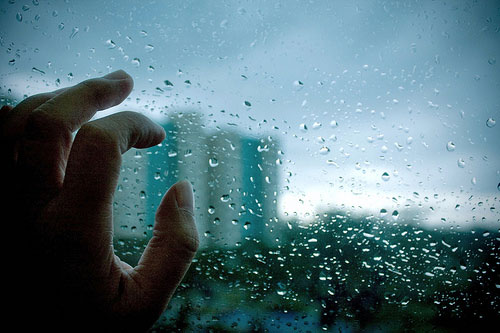 The woman sits up all night, listening to it rain.  The woman  has often sat up all night waiting for one thing or another to either leave or arrive: bandaged fingers, whooping cough, her own lookalike grandchildren.  When she can, she sleeps next to her dying mother in the king-sized bed; she bangs her own shins on the high rails, climbing in.  Her arms and hands are able to lift the wasted body of her dying mother with amazing ease.

She watches & waters the great rack of African violets in the living room; grows wheat grass for her mother’s cat.  Other times, she sits in a high-backed wooden chair, needlepointing forests in wool, chain-smoking for hours.  Her mother will die very soon; then the daughter will put on her navy dress with a large, elaborate organdy collar and fail to draw a deep breath for several days.  The woman’s several brothers and their children will fly in from all over the country, and flower offerings will dwarf the grave itself.

After the burial, the woman will pack all sorts of mementoes into her mother’s old cedar “hope” chest:  yearbooks, diaries, photographs, diplomas, invitations, programs, baby booties, baby spoons, baby cups, even a rather grisly alligator purse, complete with the head, legs, tail & feet and sharp black claws.  When she has nightmares, more often now, she sits up all night, her fluffy gray tabby queen on her lap like a hot-water bottle.  The cat’s purring leads the woman away from the perilous mountain passes & rocky cliffsides inside her head and back to level ground, so she can help her mother die properly.  That is what proper love looks like, she thinks.

Ojai is the Chumash Word for Moon, a prose poem 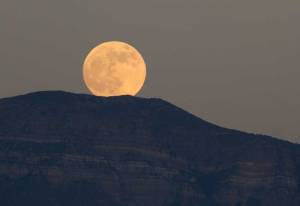 Ojai Is the Chumash Word for Moon

1. When I See the Moon She Comes Back to Me

Everyone else has something good to tell. This is what I have. This is what she gave me. Even now I see my mother’s face, soft and drunk, pale and frightful, moving through the darkness, soaring over me as mysterious and unreachable as the moon. Her affection waxed and waned, never constant. When she’d had enough Scotch, she loved me, but the way she went about her mother-love, pulling at me with sorrowful, clumsy arms given unnatural strength by liquor, made my flesh wither under her touch.

My mother and father lived in a solidly built house, outer walls nearly two feet thick, in the oldest and grandest neighborhood in their town. They lived where people like them had lived for hundreds of years. My father felt comfortable with his mahogany furniture, his linen upholstery, his hand-woven Orientals. He collected, among other things, antique, cut-crystal decanters. They were displayed in a case in the living room, unfilled, sparkling, sharply defined edges, here and there a tiny chip but that only added to their elderly charm. Things weren’t supposed to be new; he took satisfaction in the fact he’d inherited most of the contents of his house. His life, its outward details — wife, child, home, furniture, and car, standing in the community, salary, and immediate circle of peers — had functioned for many years like a brick wall, and he found himself hiding behind that wall even as it started getting chipped away.

3. Fathers and Mothers are Our First Lovers

My mother had skin like rose petals, eyes like a deer’s. Too needy for most men, she could not be promiscuous — she was not strong enough for that. There were times when she forgot to be sad, if only when some equally sad-eyed boy noticed her. If a boy loved her to the point of obsession, to the point of contemplating suicide, she imagined she might find the strength within herself to survive, but she eventually rejected all such suitors, only wanting those who were unattainable, as her father and later her husband, my own father, were. Remote, a source of funds and orders and criticism, the two closest men in her life approved of her external beauty but not her soul. They didn’t care what she wanted — they wanted her to be like all the other girls and women, to be beautiful and obedient and never talk to dead Indian spirits. They broke her will; she broke their hearts. Distance was how they both managed her. If she could have hardened herself on the inside, if she could have seen either one of them as just another man she could conquer with her flesh, it would have helped.

“What do you mean?” he asked. He and my mother were aliens to each other anymore.

“Don’t you remember sitting on your mother’s lap, in her arms?”

“Wasn’t it good to feel her arms around you, as a little boy?”

He was inside her still and he felt his penis start to shrivel. His mother! What had she got to do with anything? “What on earth are you talking about?” he asked.

“Your mother, holding you in her arms, when you were a tiny little boy. It must have felt so good.”

“You’re sick,” he said, pushing her off him.

“Asking me about my mother at a time like that, it’s sick.”

She rolled over and was silent, and then he heard her start to cry.

“No,” she said, bolting out of the bed. “I’ll sleep downstairs.”

“That’s it, after this I don’t owe you anything,” he said to the ceiling after she was gone.

5. The Coastal Mountains Cut Off the Sight of the Sea

My mother was sent away at 14 to boarding school in Ojai, where she refused to eat. She wanted to turn back the years already. The moon drew her, she felt herself drawn to its inaccessible height, its untouched opalescent skin. Looking back as if from a far distance, she mourned her own childhood while it was still happening. Her eyes rolled back in her skull, the whites looking like two small moons. She howled at the moon without making a sound. Though she began menstruating at age 9, for years she shaved her pubic hair off in secret with an old, dull razor because she did not want to become a woman. Dreaming of the ocean, hidden behind the coastal mountains, she wanted only to be clean. She felt how the spirit of a Chumash Indian warrior possessed her. As she grew thinner, harder against the world, she rejoiced that there would be less of her to feel pain, less of her to bury. The other girls at school were as mysterious to her as stars. They sparkled while she could only reflect sadness. Her clothes hung on her bones and she was sent to a psychiatrist — that very night the moon was full and blue. They don’t understand me at all, she thought. In her own way, she was a visionary, a trend-setter. Doctors didn’t have a name, then, for what was wrong with her.

Finally, after 15 years of marriage the wall between my mother and my father fell. Then my mother wanted to figure out who she was. She wanted her own personal growth; she wasn’t able to focus on anything else. She needed space and time. At first, it was only the beginning of the process, and then it became the end. She couldn’t suffer any more, so she killed those feelings that brought her pain. She didn’t want to try to sort them out just yet, maybe not ever. In the end my mother’s feelings for my father were dead, gone. She didn’t know where they went.

She and my father lost their virginity with each other. Much later, when I knew her, she was memorable for simple things: her rose garden and her Scotch & water, her menthol cigarettes and her Pucci nightgowns, her ladylike hands and her A-cup breasts, her bitterness, her resignation, her unending string of sentimental, alcoholic boyfriends. She taught me how not to be. How not to live. A psychic told me she was my soul-mate, that my heart had been broken on the day I was born, that first hazy time I looked into her eyes and saw nothing there for me. One normal thing I remember is hanging clothes out to dry with her in the backyard when the dryer was broken. Once, she even took me out to the movies. Darker engrams always swamp whatever happy little memory-boat I manage to stow away in — like when she drove drunk for the umpteenth time and hit a kid on a bicycle, breaking his arm. I remember protecting her from the police, making sure she wouldn’t end up in jail, but later coldly stealing money from her wallet, cigarettes from her purse, clothes from her closet. In the end, she drank too much, and that killed her.

Toward the end, my mother said she was on fire from the neck down. Her arms and legs felt like they were glowing, orange-red, molten. But her head felt like a block of ice. She was emotionally or spiritually paralyzed, and worried about whether the condition was permanent. She felt like the nerves from her head down to her body were cut, and she didn’t know if they would ever grow back.

Right before the end, she said she could not distinguish life from dreams — she slept little, ate even less. She didn’t feel mad, she felt terribly, irrevocably sane. Everywhere she walked the ground seemed on the verge of opening up into blackness, into fire. If only she could go mad, she said. When they found her cold and stiff on the living room floor, she wore nothing but blue nylon panties and a wristwatch.